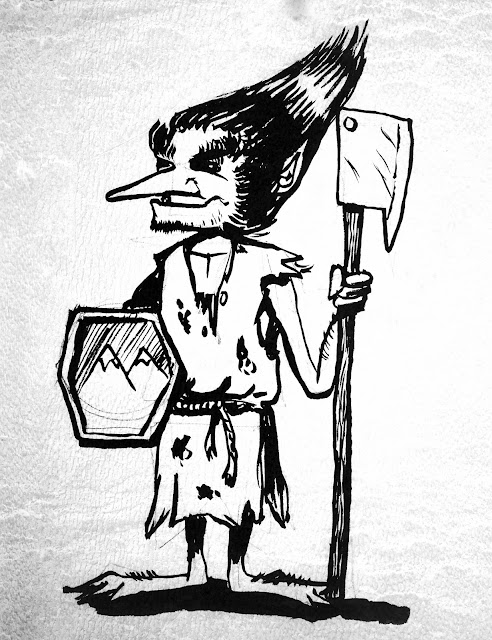 Pictured here is a troblin guarding the  Mountain Hexagon meatpacking warehouse. Fresh meat is rare in Goblinburg, and as such it is defended by the most resilient of troops.

Troblins are goblins with a fair amount of troll blood. Their regenerative ability makes them cheap to maintain and tough in a fight. Unless their opponent is aware of their tendency to pyrophobia.

It is rumoured that troblins were created by the fleshmakers. Which would make sense, since the produce sold in sinew shops comes from herds that are butchered over and over again.

So I have two ideas, and I don’t know which one will suit the campaign better. This is me brainstorming.

Deep under Anatolia, circa 1630

History, Dumas style: factions like the crowns of Europe and the Company of Jesus join the Burgmeistress and the Guild of Sigil and Candle Peddlers.
Religions can include gods of ancient Summeria (I’m sure Turkey has lots of interesting stuff too, I’ll have to research it) as well as different flavours of Reformed christianity.
Gunpowder aplenty!
A visit from the musketeer of Mars, maybe? Though I’m afraid he’s busy saving La Rochelle with his team at this time.
Goblins are interbred descendants of mythological beings. It would be easy to come up with new types: korrigan, redcaps, bakemono, karankoncolos.
Ultimately I think of this as sword & sorcery & cloak & dagger & swash & buckle. It could really work but I’m worried about the amount of research I’d lose myself into. On the plus side, introducing new players would be easy: “after the siege of Arras, you fled to Marseilles, where you met a ship captain said she knew of a city where deserters like you could hide and thrive”.

Inside a celestial object, long ago, somewhere dark and far away

This Space daemonic fantasy version is partly inspired by +Daniel Sell’s Troika! which I was reading when thinking of this.
Cultists meet to worship dark gods from the outer voids, and roam city streets to carry out their insane demands.
Goblins are star children, born of drifting seeds, daemonspawn, genetic experiments.
Magic and science are the same thing, with a lot of heat rifles and brains in jars and psychomathematic grimoires.
The Rays come from some sort of crystal dome in the asteroid; it amplifies the light of passing stars. Day/night cycles on the bright side of Goblinburg are very random (think maybe d20+d10 hours of light or darkness).
The New Worlds above Goblinburg are caves filled with alien flora. Above then is the cold, dead surface, where impossible treasure awaits in some kind of abandoned space station.
Strangely enough, this version of Goblinburg would be closer to straight fantasy (at least until the surface station is discovered, when it would morph into spelljammer hexploration). The city survives in isolation, barred the odd portal. I don’t think I mind – it’s a big enough place to keep everyone’s interest. I also think the most claustrophobic of players – the people who always want to go outside of the sandbox – would have an escape route via portals. I have both Red & Pleasant Land and Maze of the Blue Medusa. If they want to step out, they’re welcome to step into that mirror or painting. That’ll learn ’em.

So here we are. I thought writing down the pros and cons of both ideas would help me decide. It hasn’t. I have analysis paralysis, you guys.

These are 11 sorts of goblins found in Goblinburg. I’m sure more will appear. I might also post more details about some of these in specific posts. 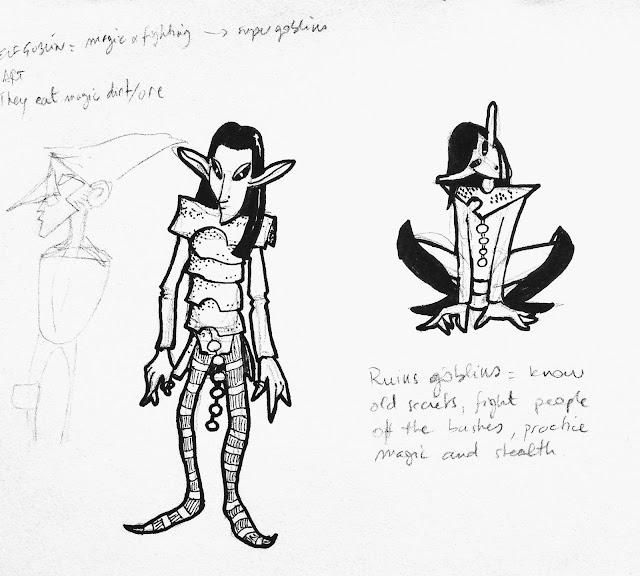 Diaphanes or surface goblins. Reskin of elves (PC class). The fungal spores in the Ruinfields, gave them magical powers. They like climbing on things to look down on you.
Snout or cave goblins. Reskin of dwarves that look like orcs (PC class). The strongest of all goblins, good with tools and weapons alike. Often employed as semi-skilled workers in the city.
Bug goblins or gobelours. Reskin of halflings (PC class). Hairy goblins who walk silently and enjoy a good meal. Come in two varieties: city gobelours, with buttoned up waistcoats and tea parties, and wild, cannibalistic gobelours. The latter are sometimes tamed by wizards who use them as hunters and bloodhounds.
Gnawer goblins or munchlings. Vicious little creatures with oversize jaws and weak limbs. They dress in metal plates (recycled tins, pots and pans or armour suits) and use hooks and chains to grab their victims, before munching on them. They don’t attack: if three or more gnawers are near you, save VS paralysis or take your AC as damage.
Roach goblins or gremlins. Reskin of pixies. Thumb size vermin with a penchant for practical jokes. Smoke them out and stamp them to death.
Crow goblins or corbelins. Reskin of goblins with a limited ability to glide. Loud and obnoxious little bastards that live under the roofs of public buildings.
Renart goblins or fox-people. Reskin of kobolds. Clever and shy, they mostly keep to themselves, hiding in cellars and getting out when no one’s looking. Fierce competitors of crow goblins when it comes to stealing honest people’s food.
Changelings or Mimic goblins. Improved doppelgangers, capable of imitating anything, living or not. Mostly solitary predators, they are considered a public menace when in groups.
Batlings of flying goblins. Reskin of orcs, with flight. Short sighted but far reaching, they can actually travel in the Big Black (if there were anywhere to go). Colonies of batlings prey on careless gatherers in remote locations. The rumours of their hemophiliac diet are only partly true.
Hobgoblins or billy guards. Very susceptible to strong authority, these goat-faced goblins are often employed as private guards or militia. Their investigative techniques are somewhat primitive.
Dwarves or bearded goblins. Another reskin of goblins. Inventive and industrious in a nonsensical fashion, they are prone to hilarious deaths. Think Tolkien’s stunties, but garden ornament size. They have long names and longer ancestry lines (especially since their life expectancy is about two years). Favourite food: cave cheese.

Hastily shaded with bad charcoal pencils, and shown filtered as an attempt to make it look a bit better.

The city is built on – and carved inside – a gigantic stalactite. The main source of light are the Rays, which come only from one direction. I haven’t decided if there’s a day/night cycle yet. It’ll depend on what kind of cave we’re taking about. (I’m undecided.)

High on Goblinburg’sdark face, a titanic carved head casts starlight with unblinking eyes. No one really knows what it’s deal is. I have no idea myself. The batlings who live in the Growth and Weaklinks below avoid the light like the plague.

Drawing this, it struck me that magicks like spider climb and levitate would be invaluable to people who work outside the buildings and tend the fungal gardens of the bright side. I’m thinking one-use charms you can wear on your person. Potions require two hands and scrolls are literacy and light dependant. 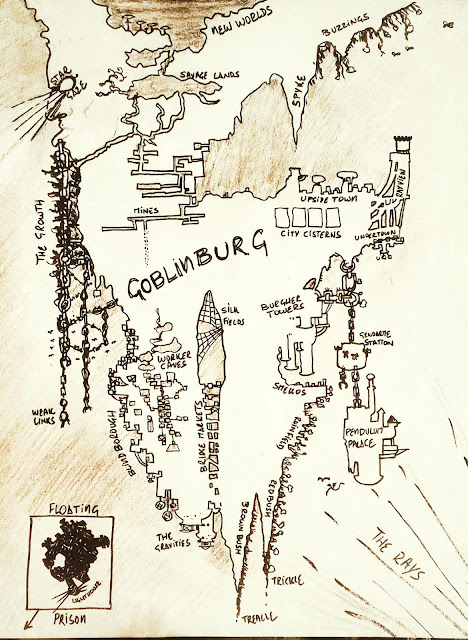 I’ve been thinking about running a Basic Dungeons & Dragons campaign for a while now. Will I do it, I’m not entirely sure. I have my own old school ruleset to finish publishing and I don’t want to mix both projects. But I want to get this from brain cells to pixels, so here we are.

Before I delve into what I know (and would like to know) about the setting, I’ll just list what I want to do with this game/setting.