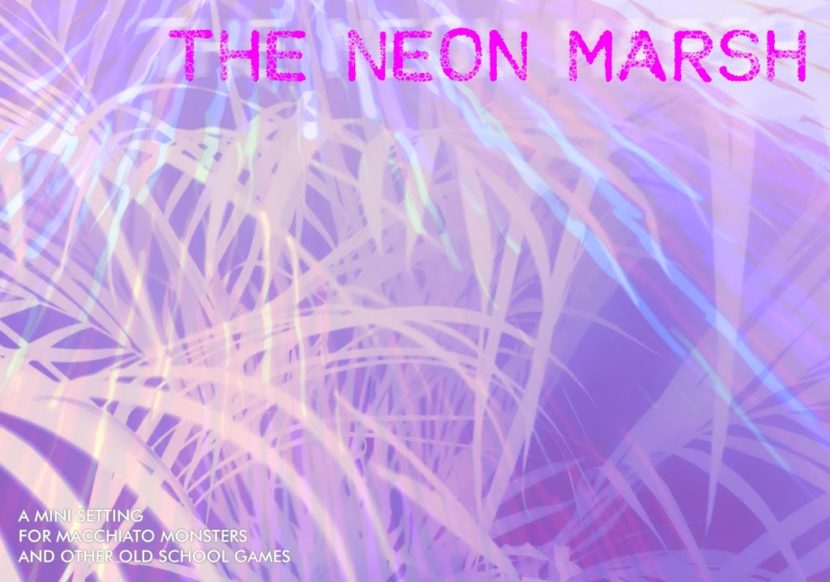 It took me a while, but I’ve completed the text of the first setting for Macchiato Monsters. It’s not something I had planned to do from the start, but I hit a snag with the Build-your-own-setting booklets so when Paolo suggested a mini-setting to support the release of MM, I thought I could use the tools I intend to put in said booklets to create something. So here it is:

I took some chances with this. It’s ten pages, including the cover and three one-page dungeons, so it is very terse. The world material is presented alphabetically, which may not be the best way to communicate it. And there are a lot of holes to fill in, DIY style. We’ll see what reviewers say.

In any case,  I had a lot of fun inserting as many 1980s sci-fi references into a pseudo-Arthurian plotline. Here is an extract from the introduction – well it’s about half of it. Told you it was terse.

The Neon Marsh lies south of the island of Freetannia, a fragmented kingdom whose folk forgot their past glory. People toil in the service or war dukes and petty kings, while bards still sing the prophecy of the Queen of Future Pasts, who shall unite the land again. People come to the Marsh running from the law, mining for Neon, or looking to understand the weird phenomena called GLITCH.

That’s one thing off my plate for a little while. Next up: Ford’s Fairies, aka the Henry Justice Ford Monster Manual Project.