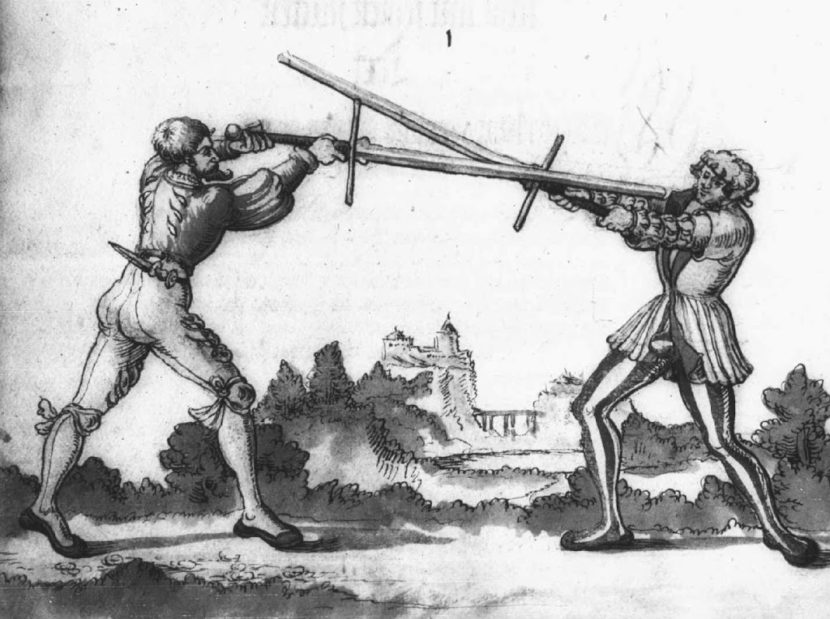 Related to my last post, I was reminiscing about the old damage notation, before they systematically used the XdN abbreviation. 2d6 was noted 2-12, d4+1 was 2-5, etc. I remember it being a bit of a math challenge when I was a kid. But I was thinking, this min-max damage notation could be used in a one-roll combat system (like in Macchiato Monsters, or if you wanted to make your D&D fights much shorter).
Everyone loses HP
If you miss your attack, the monster hits you and you take damage equal to the higher value listed in their description. That orc bastard with the 2-7 (d6+1) scimitar wounds you for 7. Ouch. But you’re a badass adventurer and you get to scratch him for 4 (your modified damage is d8+3, or 4-11). That actually has a good chance of killing him (assuming your referee has good taste and rolls for her monsters’ HP).
If you hit, your magic sword does kill the orc with its max damage of 11. But fighting subterranean cannibal warriors is exhausting and you still lose 2 HP.
Of course, it’s a system that makes strong fighters stronger, but it might be worth a try. Think about it: your combat round would go from four rolls to just one. 75% less rolling and math, who wouldn’t want that?
Side notes
How do you handle non reciprocal attacks, like missiles and traps? Well, player characters attacks are the same, except the PC doesn’t lose hit points on a miss – maybe just 1 to account for fatigue. Monster attacks can be either rolled by the referee, or they can call for a save.
Critical hits could be a choice: either do more damage or take none from the opponent. Maybe throw a couple more options in the mix: break melee, trip your opponent, set up an ally for advantage next round, etc.
I’m thinking a system like this might need ablative armour… maybe? That would depend on what the odds of hitting are (do you use THAC0 or roll under?) and the overall hit points progression.
In conclusion
It is really just an idea. I might try it if I was to run B/X or OD&D, but I’m too busy at the moment with Lunchtime Dungeons to pursue it further.  If you do, drop me a note! 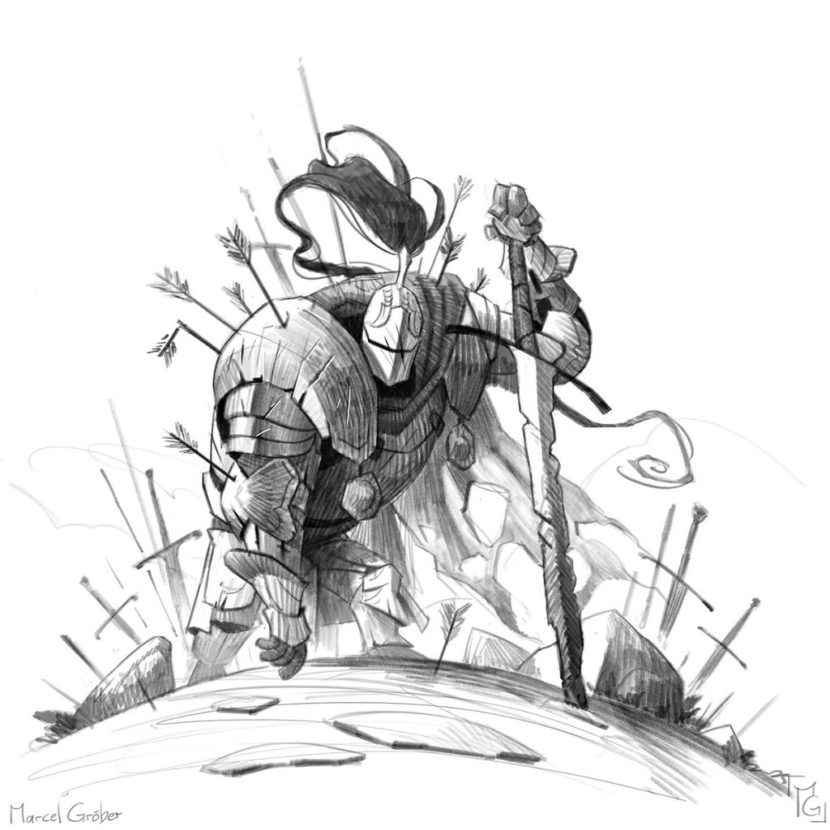 For multiple reasons (one of them being my incorrigible tinkering tendencies) I keep refining the way Lunchtime Dungeons handles damage. Hit points are gone and gutted, but I want to keep hit dice. I  think hit dice can be a fun mechanic.
Currently: the Wounds System
This is how I’ve been running damage after the system I was using proved to be inelegant over the Christmas playtest.

Characters have the one hit die, d4 to d12 depending on class and progression. For simplicity’s sake, damage in Lunchtime Dungeons is a fixed number. A long sword does 6 damage, an musket 10, a dagger 3. A modified attack roll of 20 or more doubles that. Note that I’ve kept hit points for monsters. Fights can be over very quickly if the players are lucky.

Damage is measured in wounds. You die if you have more wounds than your level. Every time you are hit, you roll your hit die. If the result is equal or over the damage, you’re fine. Not even a scratch. If you don’t, you take a wound and we look at the difference (damage minus HD result) on this table:

You recover wounds with healing magic and rest.

This version is highly lethal, as even a high level fighter with a HD of d12 can roll a 1 and be insta-killed (a mere mace does 7 damage, and a crit is always a possibility). I like it on paper, but I’m only human and I’d be heartbroken if the badass Viking lady in our campaign got offed that way.

The Hit Dice Pool System
Another way would be to dump the wounds. Instead, I’d give characters a pool of hit dice – one per level makes sense, maybe with a maximum number of dice that depends on class.
Whenever you’re hit, you roll as many HD as you want and add the results together to beat the damage (still a fixed number). The hit dice are then lost. When you’re out of dice, any damage taken kills you unless you make a CON or WIS save (your choice).
The wounds table above is optional. You can play a lighter game where it’s all flesh wounds until you drop if that’s what you’re into. I like my combat gritty and dangerous, so I would keep using it (maybe tweaked a little to make sure it’s worth rolling a single d4 against a battle axe or blunderbuss).
You recover your HD with magic and rest. I might use the 5E rule: get back a number of dice equal to half your level for a night’s rest.
Now that’s on paper, I do like this better. As a player, you have more control over your health as a resource. A mid-level fighter can pretty much guarantee they’ll get out of the first scrap unharmed, but they’ll have to be careful after that. Also, this doesn’t introduce another concept in a game that’s supposed to be light and beginner friendly.
Any thoughts, or should I go edit my manuscript and print out yet another batch of character sheets?