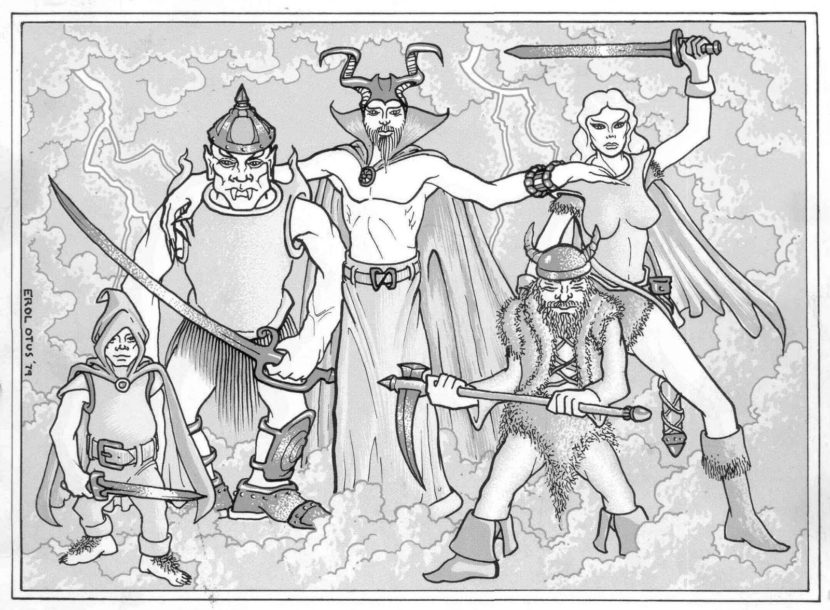 My lunch hour game uses ALL THE SPELLS. It started with the lists from the Venerable Old Tomes that are Basic/Expert D&D and Advanced D&D, but I soon added those from Wonder & Wickedness and Marvels & Malisons (I cannot emphasise the usefulness of these books enough – they come with a level-less magic system, caster schools, catastrophe tables, and weird starting equipment for your weirdo characters), to Gavin Norman’s Theorems & Thaumuturgy, Johnstone Metzger’s Nameless Grimoire, and various funkiful lists gleaned on the internet over the years.

As an experiment and for portability’s sake, I want to have a list I can stick in Dungeonsnack (an even more streamlined version of Lunchtime Dungeons). So here is what I’m doing: I’m taking the spells from Basic D&D, trying to rewrite them so that:

Note that I am dumping cleric and magic-user/elf spells together (Dungeonsnack is classless). I don’t think it’ll be a problem for most of you. These are the spells on the 1st Level lists. (I intend to do at least the 2nd level spells, and some of them may be bundled with the spells below.)

So that’s 15 spells. Hopefully I’ll have another 15 with the 2nd level list, which would give me a handy d30 table.

Duration: 1 minute
The caster’s eyes turn a luminous blue as their perception shifts into the astral realm. They can now see auras and energy field emanating from creatures, objects, and places. This spell is useful to detect magic, track unholy creatures, and guess someone’s mood.
The referee gives superficial information about the auras seen, but the caster must save to obtain specific information about an aura in particular (for instance to identify a magical item or read someone’s alignment).
A failure ends the spell. On a natural 1, the caster falls unconscious for 1d12 hours.

>> This is Detect Magic. I am trying to bundle it with other Detect spells (but not with Detect Traps).

The caster channels their magic into sound in order to influence a battle. It affects as many HD worth of creatures as the caster’s level – who must all be able to hear. The effect depends on the instrument used by the caster:

>> Remove Fear. I made it reversible, and arguably more efficient. My slot-based encumbrance system makes it interesting that you have to carry all these instruments if you want to use the spell to its full extent.

Through an astral conduit, the caster can converse with an erudite entity about matters of idioms and the occult. They can ask as many questions as they have levels. The Stygian Librarian answers truly but briefly, as their work day is often quite busy.
At level 3, the caster is able to transmit images of texts, bas-reliefs, or artefacts. Each image consumes enough energy to counts as two questions. Full translation is beyond the purview of this spell, but the Librarian will provide a summary of a text sent.

>> Hopefully a more fun version of Read Languages that can be used in diverse situations. I’m still waiting for my copy of The Stygian Library, so I have no idea what its librarians are like. I may change the name when I’ve read the adventure.

The caster summons an invisible denizen of the Winds Realm to take damage in their stead. The djinn has one hit die per three caster levels (2 from level 4, 3 from level 7, etc.), and returns to its plane when brought to zero HP.
On a bad attack roll (less than the caster’s level on the modified d20), the djinn retaliates (1d4 damage per three caster levels). On a crit, the caster is hit.
The spell binds the djinn for one hour. It is possible to bribe the creature with jewels and tales of mighty deeds to double this duration.

>> A simple alternate version of Shield. I had another idea, but I’ll use it to replace Web.

The caster cuts out torn tissue, broken bones, ruptured organs, and the like with a putty made of dead flesh macerated in embalming spices and quicksilver. The deeper the wound, the longer the surgery: a simple cut takes a few seconds, replacing a severed limb or fixing punctured lungs requires hours.
The target recovers up to a number of d6 hit points equal to the caster’s level. Count the number of 6s rolled:

>> Why would you make Cure Light Wounds easy when it’s so fun to make it gross?

This spell turns an arrow, bolt, or bullet into an infallible projectile. It can either deal double damage, reach double its range, or hit a specific location to disarm, pin, blind, etc. (for these effects, a target with more HD than the caster is allowed to save.) The projectile is considered a magical weapon, and retains the enchantment for an hour.
The caster cannot cast the spell and fire in the same combat turn (but they can coordinate with someone else).

>> A low fantasy equivalent to Magic Missile. I like my wizards with heavy crossbows and horse pistols.

Range: 10 m
Duration: 1 hour per level
Conjures a nano-fungus that instantly dissolves the target (save cancels) and grows into an identical double in d6 minutes. The changeling will obey any reasonable order from the caster. It conserves enough of the target’s nervous system to know its daily habits, opinions, and recent memories. There is 10% chance per level that it’ll remember any fact outside this.
The fungal creation has as many hit dice as the caster, but no magical abilities.
When the spell ends, the changeling… (roll d6)

>> Charm Person is one of the spells from the original list I’d keep, but it was fun to think of another spell to fill its super useful shoes.

Gift of the Tongue

Duration: one minute
A mouth appears on a surface or object, which is given partial sentience. The voice has a volume proportional to the size of the awakened speaker. Its words are usually stream of consciousness, and often complaints about the damp. However a clever listener can glean some bits of information. It is possible to cast this spell again, which bestows an ear to the object. The caster can then ask questions (the referee may want to roll for reaction first).

>> I really like Ventriloquism, but it is often eclipsed by the more immediately useful spells. I tried to come up with something that could be used for diversions as well as information gathering. Also, giving the dungeon a voice is a good way to build atmosphere.

Halo of the Selenites

Range: touch
Duration: 1h per level
The target (who can save if unwilling) glows with a silver light, about as bright as a torch. Elves and other fey creatures can use their infravision when inside the spell’s moon-like light.
The target’s appearance and demeanour become lunar: pale and aloof, even detached from the world. Their alignment shifts to Neutral until the next moon phase (1d6 days, unless the referee tracks these for some reason).

>> A Light spell with some personality. I’ll use another, more offensive idea for Continual Light.

Duration: 1 minute per level
The caster causes a powerful magnet (costs 100-600 GP, reusable) to hover about one metre above the ground. The magnet becomes the centre of a sphere 5 metres in radius. Any undead, summoned, or extraplanar creature trying to to enter the area must save with a penalty equal to the character’s level to do so. Ranged attacks suffer from the same penalty.
The magnet can be moved with some precautions (materials burn or melt, flesh takes 1 damage per caster level every round).

>> This is Protection from Evil in a world where microwaves dispel ghosts.

Range: touch
This spell deals damage to fungi, oozes, jellies, and other amorphous creatures. Roll 1d6+1 per caster level for the spell’s Potency.
It can be used to clean surfaces from mould and bacteria (Potency in square metres). It will also purify food and drink (Potency in days worth of rations). As it works on malign miasma, it has a good chance of curing some diseases: roll the save or chance of infection again.

>> I don’t know a more narrow spell than Purify Food and Water. Hopefully this one will see more use.

The caster talks to a door, gate, trapdoor, anything with a locking mechanism, and orders it to open, close, lock or unlock. Roll 1d6 + level (or Charisma modifier if it is better):
2-3: the door reluctantly opens or closes. Locks are operated slowly and noisily. Traps are immediately triggered. The spell ends.
4-5: the door agrees to lock or unlock itself, leaving any traps or active runes in place (hopefully someone will check for them). The spell ends.
6-8: the door obeys and warns the caster about any dangers on it or on the other side. The spell lasts for an hour.
9-12: the door obeys, disarms any traps or runes, and will act independently to facilitate the caster’s endeavours and make their enemies’ lives harder. The spell lasts until sunset.
13+: the caster becomes the doorway’s master until someone else casts this spell on it. They decide who can go through it, even if the door is forced or destroyed. If the caster is not around to allow passage, they must specify conditions (in as much detail as they want, for the door will follow instructions to the letter).

>> Hold Portal, Knock, and Wizard Lock all bundled into one. In a spell less list, there is no need to scale the power to deal with fucking doors.

Range: 10m
Duration: 10 minutes per level
2d6 HD worth of creatures are phased half a cosmic inch to the left. Roll on the table below to find out what happens to them (1d4 for dumb monsters, 1d6 for human intelligence, 1d8 for genius levels).
1. The victims are devoured by a paraphasic worm, never to be seen again.
2-3. The targets panic and scatter. They reappear in random locations at the end of the spell.
4-5. Same as above, but they stay together.
6-7. The victims stalk the characters, ready to pounce on them at the end of the spell. They can walk through walls and will look for the best ambush conditions.
8. The targets find a loophole in the laws of the universe and reappear within seconds, along with a dangerous ally.

>> Sleep is another B/X spell you wouldn’t want to lose. Again, it was interesting to find something with an equivalent use (get rid of a bunch of enemies easily) and drawback (they can be woken up).

Duration: until sunset
The spirit of a dead torchbearer is summoned to serve the caster. Their translucent body casts a unsettling shadow, wriggling and warping constantly. Their youthful, pleasant face is betrayed by hollow eye sockets, their voice a whispering echo. Though obedient and polite, they only consent to help with light or carrying. Magic and enchanted weapons will dismiss them (1 damage is enough), and they insist on clocking off at the end of the day.
The torch or lantern of the shadow hireling flickers according to unseen ethereal breeze, but lights as normal and doesn’t need fuel.
If they douse their torch, the ghost can be made to carry up to 60 kg (about 2000 coins) of equipment and treasure.

>> This was a Light spell you can talk to, until I tried to think about an alternate Floating Disc. Now it does both.

Duration: until dawn
The targets (as many as the caster’s level) of this spell doesn’t need food or water. They do not suffer from normal cold or heat, and fatigue doesn’t exist for them. They need to sleep, but are not at risk of nodding off if they choose not to.
When the spell’s effect ends, they must save to refrain from eating 1d6 extra rations.

>> Resist cold, stripped off of its very narrow combat usefulness, and made into a generic, somewhat bland survival spell. If you have a better idea (for this one or any other), I’m all ears!