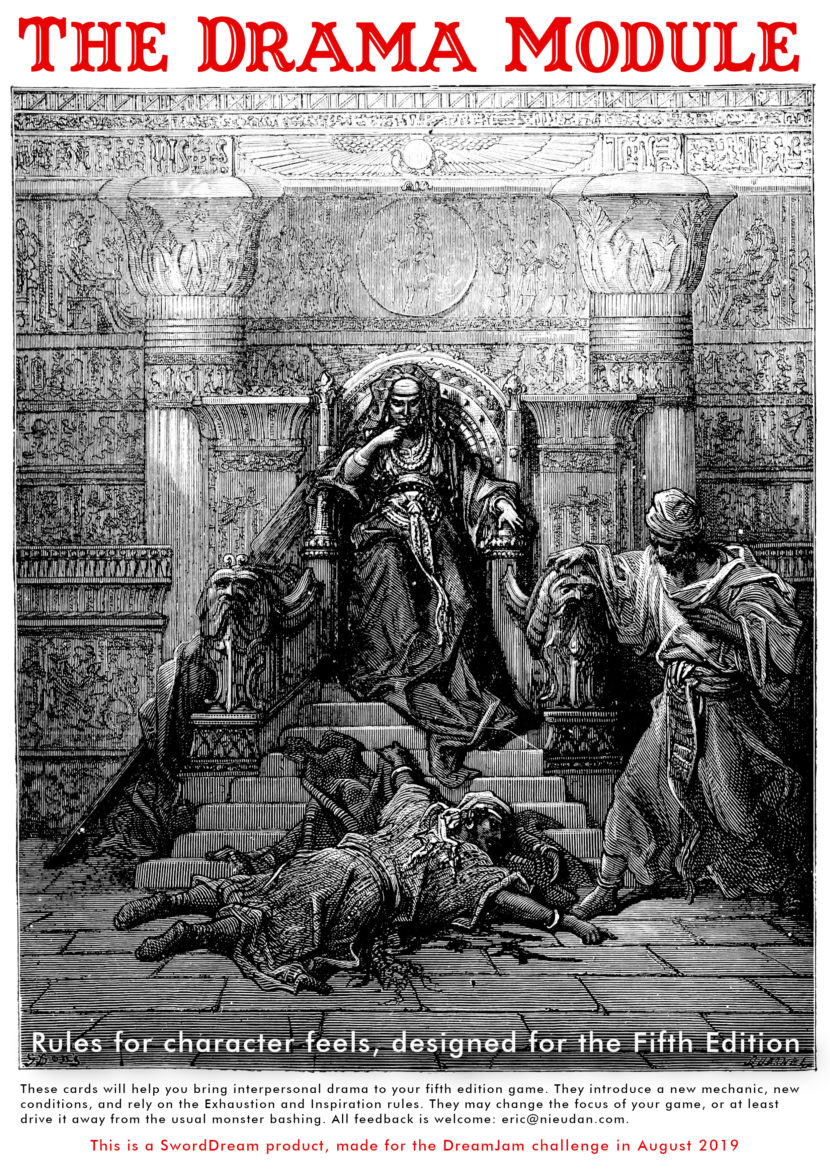 I made a thing for fifth edition D&D. It is called The Drama Module. Here is why I made it:

You know how, watching people like the cast of Critical Role bring these wonderful characters to life, you think: “how will I get my players to create cool relationships between their characters?” After all, inter character drama isn’t in the rules. What’s in the rules is mostly exploration and combat.

So my thought was: “why not add rules for character drama?”. I took advantage of the SwordDream game jam on itch.io to try and lure players into creating strong relationships between their characters.

With The Drama Module, they’ll do it because of the rules. Tell them they can have more than one instance of Inspiration, that they’ll be able to take Inspiration from another player when they need it, or to use it twice to roll 3d20 and keep the best result! Oh and tell them, they’ll get some XP for confronting, manipulating, or supporting each other. All for the low, low price of thinking about their characters as people instead of combo delivering devices.

Character development and extra powers… What’s not to like?

The Drama Module is a set of 27 cards (more if you print out some duplicates) available as a PDF from itch.io. You can get it from this handy widget:

(Or by following this link to The Drama Module on itch.io if for some reason the widget isn’t working.)

And while you are at it, hang around and have a browse. The DreamJam attracted 63 designers from all over the world, and more importantly from across community barriers. Most of these games are free too! Collect them all! 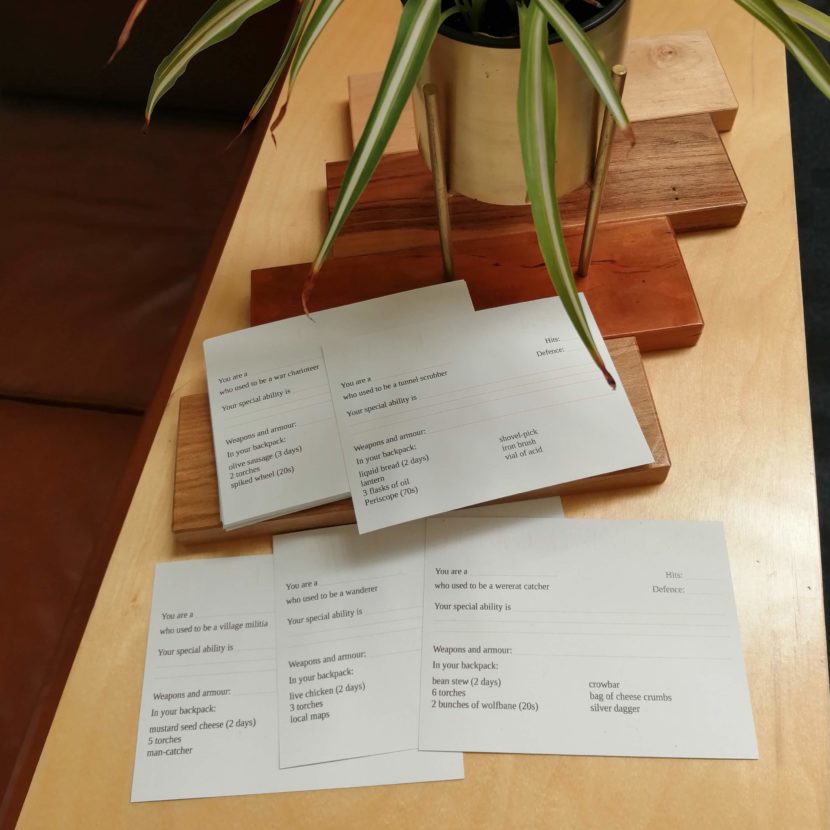 This rather long winded post tries to explain the thought process behind the new rule for backpack equipment and background in Dungeonsnack, my minimalist adventure game designed for one-hour sessions.

I’m not exactly sure how it happened, but over its years of development, Macchiato Monsters‘ character creation became a game within the game. Part of the interest is to give your character a backstory based on the equipment you rolled. Why has my dwarf goatherd a book of scriptures? How come my noble wizard is trailing an ox laden with jars of snail soup? These questions are answered before or during the game, by myself or with help from the other players and referee. They may become part of the session, or they may not. This system adapts to the adventure being played, and more importantly to the group’s culture around narrative collaboration.

As a player, I love making up an interesting story about why my character is on the road with a rag-tag band of weirdos. This will often infer an origin, previous profession, or (in D&D 5E terms) a background.

Old school style adventure games like to give characters a previous career. It is a great way to give a hastily generated replacement character a roleplaying hook, some kind of initial flavour. Historically, there was the random table of ‘secondary skills’ in AD&D. In the OSR, Dungeon Crawl Classics is known for its level zero villagers and their farm animals; Electric Bastionland will have a hundred failed careers. Luminaries of the adventure games blogosphere have provided us with more than a few olden times professions lists, some of them with quaint and/or interesting equipment for your character.

What defines an adventurer?

While I was working on Dungeonsnack recently, I was thinking about the limited amount of data the game has to define a character: a type (class or species, works like Macchiato Monsters‘ traits), a random starting schtick (from a talking cat to wings to telepathy to a lot of cash), hit points, and equipment.

At first, equipment was one of three types of packs: soldier, scoundrel, and scholar, each one with a table for backpack contents and a choice of weaponry and armour. It was fine, but Dungeonsnack is a minimalist game designed for beginners and one-hour sessions — a lot of choices at character creation isn’t what we want, really. .

So it occurred to me that I could have a sizeable equipment table, the same for everyone. And to make it a bit easier for newbies, I would add a former occupation to each equipment line. Here are a couple of examples:

I wrote 36 of these backpack backgrounds. I’ve tried to give them at least one interesting or useful item, as well as a colourful profession. Most of them also feature a valuable item an enterprising player may want to sell to buy adventurer’s gear. We’ll see how this works in game this weekend at LasagnaCon. Again, Dungeonsnack being designed for one-hour beginner sessions: I can see this working with seasoned players, but maybe that’s just too much information for the purpose of team building sessions with Dungeons & Dragons.

One of the most useful PDFs I ever got from DrivetrhuRPG is the Better Legends Illustrated Equipment Packs. I’ve given these randomly to new players to help them flesh their characters out. Months down the line, this investment is still paying dividends. Llike when the fighter uses the wig from for her entertainer’s pack when her hair gets burnt off by a fireball. To this date, no one knows why a bloodthirsty shieldmaiden is carrying more costumes and make up than Molière’s theatre company.

Dungeonsnack isn’t going to have illustrated equipment sheets, but I made the next best thing: character sheets pre-filled with the “backpack background”, i.e. the equipment list and failed profession. Instead of rolling on a table, the players pick a sheet at random and build their character from there. I figure this method should help new players and veterans alike to choose a direction for their character: if I pick the bear wrestler sheet, for example, I can decide to go for the burly warrior type, or fight the cliché and create a wizard. It’s a jumping point for my imagination.

I’m curious to see how this idea flies.