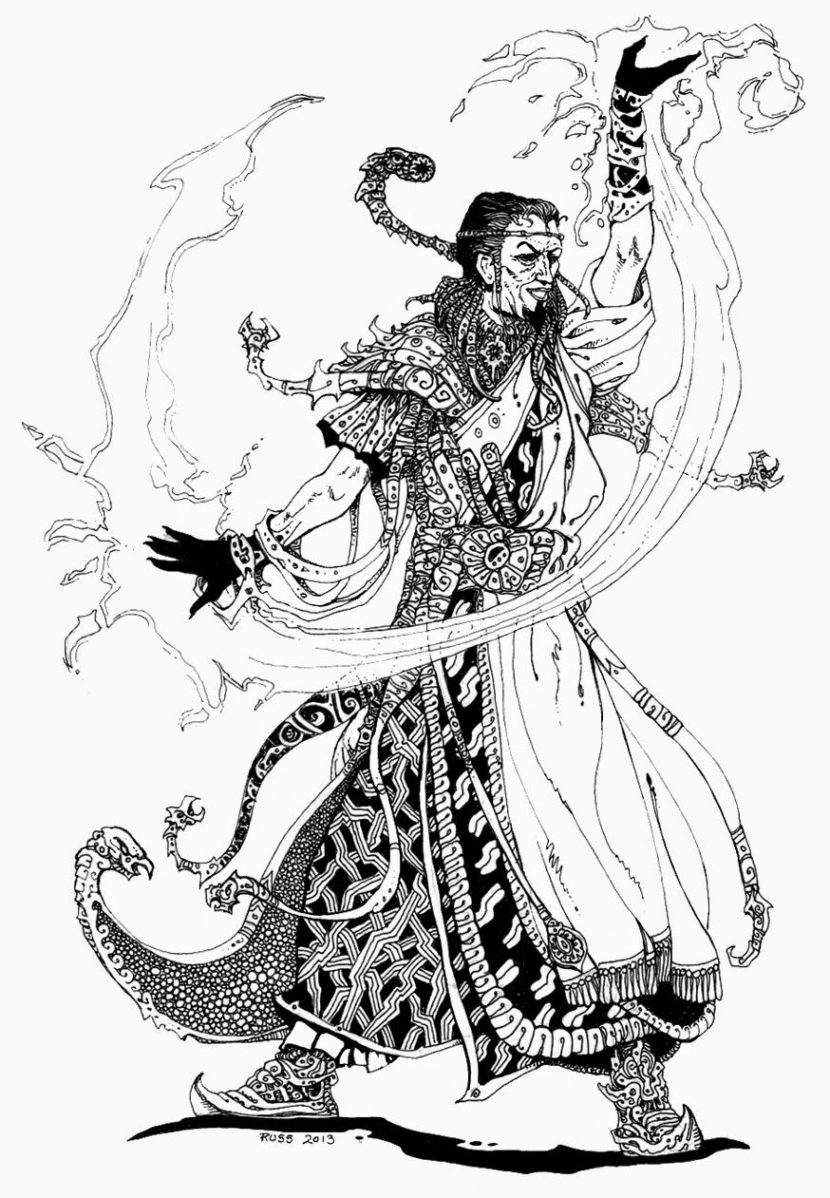 Only six spells for this third installment? Well, I only needed this many to complete my d66 table. The goal was to have a decent amount of weird, B/X-adjacent spells for Dungeonsnack. Maybe one of these days I’ll go over all the B/X spell lists to make a book, but not today.

Read the reimagined B/X spell lists for 1st level and 2nd level. They each have 15 new spells for your old school adventure game.

The caster enchants a ball made with the gallbladder of a fox and filled with dried nettles, sulfur, and 100 GP worth of jasper powder. Once thrown, the ball catches fire for 1d6 rounds, and then explodes into a ball of elemental fire. The explosion, the size of a small house, causes 1d6 damage per caster level to anyone in it (save for half).
Note that an attack roll may be required to throw the ball where it is expected to land. It is possible to try and kick it somewhere else while it is just burning, but there is a cumulative 1-in-6 chance that the Baell of Fyr will explode every time it is touched. (So yes, shooting at it is a good way to shorten the fuse, so to speak.)

>> I’m not even trying to make Fireball better. Why would I? This is just a riskier, slightly more prone to shenanigans, version of the BBQ magic we all know and love.

Duration: an hour per caster level (or less – see below)
A statue, figurine, or other inanimate, tridimensional representation or a living being comes to life. It responds to the caster’s command with limited, dog like intelligence. The size of the figure isn’t relevant; it always has as many hit dice as the caster’s level. It has the non-magical abilities of the creature it represents, although flying, climbing, etc. may be impossible if the figure is to heavy.
The caster may elect to project one of their five senses into the figure, perceiving what the creation does. This deprives the caster of their sense until the end of the spell. They can stop the sensory projection, but they release control of the figure, which then acts accordingly to its form and intelligence.
If ordered to fight, every round of combat removes one hour from the spell’s total duration.

>> A spell inspired by Growth of Animal and Clairvoyance. Because reskinning them individually would have been boring. I like that you can use this spell on a clay pigeon for scouting purposes, and to animate the colossus of Rhodes when the Spartan orcs attack.

Duration: 1 hour
The caster draws from the Earth’s bounty and forms a suit of armour around their body. Soil, stone, sand, metal, wood, roots, dead leaves… Anything grown from the ground or coming from the ground. It doesn’t have to be raw and untouched, so the caster could use an existing suit of armour or the fragments of wooden furniture. The sturdier the stuff used, the less the spell needs of it; a suit of Gaia’s Platemail made from reeds would be thick enough to make the caster look like a wicker giant. The material vanishes at the end of the spell’s duration, leaving but a trace of the finest dust.
For combat purposes, the caster is treated as wearing plate armour and shield. They also strike as a fighter of their level, as their blows are fueled by nature’s fury. Every attack dealt by the caster depletes the spell, worsening their armour class by one point. If the AC is back to the caster’s original score, the spell ends.

>> This spell is Striking by way of Tenser’s Transformation. I always thought that was an underused spell.

The caster’s hands disappear into the quasi-dimension where magical energies live. Within the spell’s duration, they can manipulate the lines and shapes that make up an active spell. Doing so is a dangerous proposition as mortal eyes cannot see magic forces without aid.
If there is indeed magic there, the caster can attempt to affect the spell they are ‘touching’. This process takes 1d6 minutes. Roll a die on the table below. The type of die rolled depends on the caster’s level:
> 1st-2nd: d4
> 3rd-4th: d6
> 5th-6th: d8
> 7th and above: d10
If the caster can see the magical energies they are manipulating (because they’re somehow visible, or through the use of a spell or magical item), they roll the die twice and choose the result.

> This is me redoing Dispel Magic.

On the Wings of Angels

Duration: 1 hour
Responding to the caster’s invocation, a cohort of invisible angles, djinn, cloud demons, or ill wind spirits come to lift them from the ground.
These beings can be directed to carry the caster at great speed to a place they know, or simply away from danger. Distance isn’t relevant as the angels know many a planar shortcut. The journey always takes an hour.
More intricate orders, such as “keep me afloat above the battle, but out of reach from goblin arrows” or “let us explore this cave complex”, need to be thoroughly explained and bargained for. Not all of the angels present may agree to a new command and, should the caster attempt to bribe them, their tastes and desires may be different. Epic songs and sad poems are appreciated, as is sparkly wine, intricately knit lace, and the freshly harvested livers of certain birds.
Traveling to places that are difficult to reach, such a well defended fortresses or hidden demiplanes is always costly. The angels will demand something aluable to the caster (like their spell book or right hand) or almost impossible to obtain (the joy of a lost king, a pearl that grew inside a walnut, the motherfucking Runestaff).

>> This is Fly, of course, which I tried to make into a transportation spell as well.

Duration: 1 day par caster level
With this spell, the caster effectively signs a contract with the lawmakers of the universe. They get immunity from one source of harm of their choice:
> fire and cold
> mundane weapons
> harmful spells
> falls and crushing
> life drain
> other (as agreed with the referee)
The caster takes no damage from it, but everything else is slightly more dangerous to them. Add +1 to every damage die rolled against them (so 1d10+1 would be 1d10+2, but 6d6 would become 6d6+6).
This spell cannot be dispelled before the end of its duration.

> This is Protection from Normal Missiles, with 50% less guarantees.