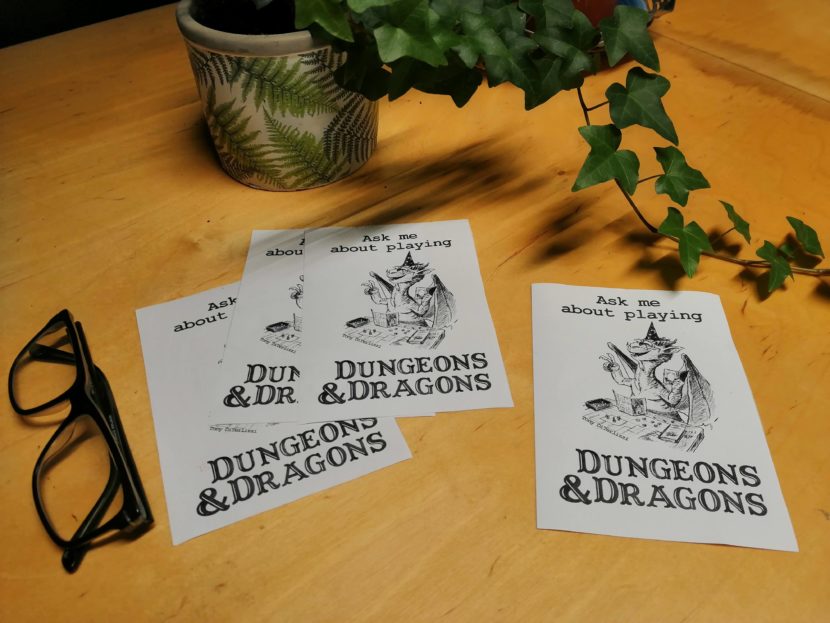 Following on last week’s post about finding D&D groups in Dublin (and everywhere else), I thought I’d push these free Ask me about playing Dungeons & Dragons flyers. I made them using one of Tony DiTerlizzi’s Inktober sketches.

My first impulse was to do these for myself, but Tony very kindly agreed to let me share them, so here you are. It’s on my Itch page, the one I created to publish mu experimental Drama Module for Fifth Edition. You may need an account to download, but the files are free.

If you don’t know Tony, he’s an author and illustrator, and also a lifelong Dungeons & Dragons player. His work on the Planescape setting in the 90s showed the world that you could give a strong art direction to a mainstream tabletop RPG line. I was fortunate enough to interview him a few years ago for Inis Magazine and ask him about gaming. I can’t find the interview online, but thank Tyr we have Google docs: Tony DiTerlizzi interview for Inis Mag.

Anyway, download these Ask me about playing D&D flyers, display them on public places, and have nerdy conversations with strangers!

lfg* is not just flgs** anymore.

Back in my day (you kids might now those olden times as the Stranger Things Era), finding a group of like minded nerds to gather around a table covered with dice and potato crisps wasn’t easy. And you know what? It’s not too easy nowadays either.

Where I’m from, we had local clubs. But I guess clubs aren’t a thing in this country (they’re still going strong in France). If you’re a student at a major university, you can easily join the gaming society, and you’re probably not reading this.

So how do you find a group to play Dungeons & Dragons with? You can always ask your nerdy friends if they’re into it, but chances are you would have to be the Dungeon Master — and not everyone is ready to DM, especially if they’re just starting . Do ask your mates if they don’t know of a group accepting new players. You never know.

EDIT (22/10/19): If you’re not afraid of talking D&D with randos, I’ve made these flyers that you can leave near you at the library or in coffee shops. Get them from my Itch page. And yes, Tony DiTerlizzi did me the honour or letting me use his Inktober sketch.

The FLGS is a good place to start

Back in the day, hobby shops had a corkboard where you could pin a note along the lines of “9th level Dwarf looking for adventuring party” (100 gold pieces if you can tell me where this reference comes from!). Now, things are much easier: a lot of places have organised play modules. Drop by, bring a character, and have fun. Gamers World on Jervis St hosts Adventurers League events every other Monday night, apparently. If you know D&D well enough, it’s a straightforward way to play regularly.

EDIT (22/10/19). There is actually a website for the Adventurers League in Dublin.

Wait, aren’t we nearly in 2020? We have internet to look for people without having to interact with people first! Facebook is probably the first place where you would look; there is a Dungeons & Dragons Ireland group where I’ve seen some LFG posts.

There is also a very active, and super friendly Dungeons & Dragons in Dublin Meetup group.

Of course, the mission of a Meetup group isn’t to find you a regular D&D table. It wouldn’t be a Meetup group otherwise. What this one does, among other things***, is “one-shot” nights in pubs. It’s easy, beginner friendly, and no one has to commit to anything more than sitting down and play for a couple of hours. (And if you’re really not enjoying yourself, I guess it’s easy to make an excuse and go home.)

I had a really good experience at the last one-shot meetup in Stoneybatter. Coming in, I saw some serious gamers, ready to play some serious D&D. I was early, and rather than commit to one of these tables, I waited and chatted with some of the other newcomers hanging about, waiting for another DM to finish his prep. Turns out it was a good move: I ended up playing with five young(er than me), mostly foreign (like me) players in a very fun, very comedy oriented game. DM Daniel ran us through a fun romp in a wizard’s tower, complete with inverse gravity rooms, that a tribe of kobolds had stuffed with traps. The night was about exploring and making mistake after hilarious mistake.

I have my qualms about fifth edition D&D, one of them being that it’s too combat oriented to my taste. I was dreading having to spend the whole night going from fight to fight, counting squares and begging the healers to save my useless first level wizard. Daniel had the wisdom to wait until the end of the night to give us the option to resort to tactical violence. We had a tense fight with a dragon-like creature on top of a treasure pile. A proper heroic ending!

Among us, one guy had never played D&D before. I think he got a good impression of our hobby after our amateur antics and explosive shenanigans.

On my way back that night, I reflected on how lucky I had been to immediately find a table where everyone was on the same page. Don’t get me wrong: had I opted to sit with one of the other three DMs, I’m sure I’d have enjoyed myself too. I enjoy tactical fights (I play Gloomhaven). But I don’t think I would have mentally labelled every single participant as “would play with again”.

I think one-shot nights such as these are a great way to make D&D friends. This is what we used clubs for, back in mine youthe: to find the people we want to invite to adventure in our own basements.