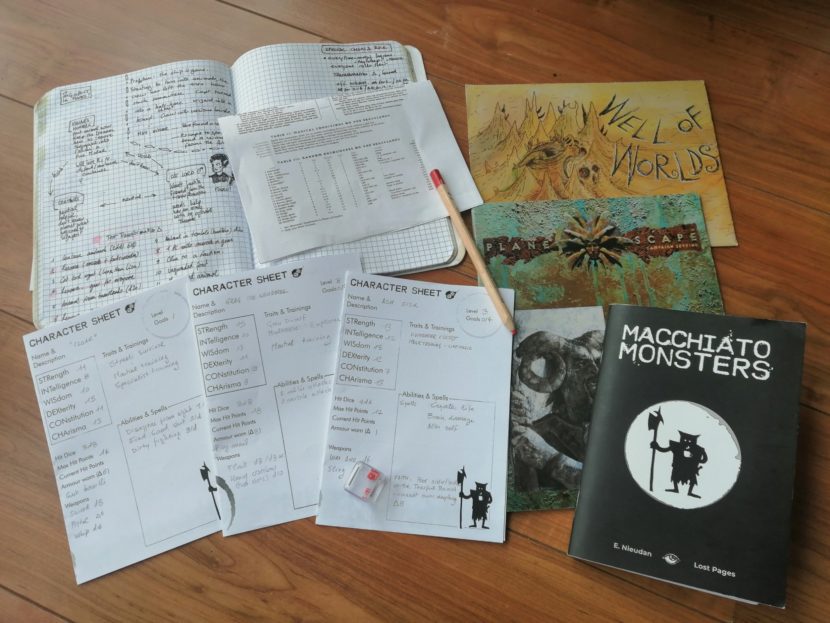 Last weekend, I ran Macchiato Monsters for the first time since Easter. Over a couple days, I tweeted a sort of journal of my DM prep. Go read it if you want the background info or skip to the listicle.

Oh, and I don’t think I posted about the new official character sheet for Macchiato Monsters? You can grab it for free from my itch page.

7 Tips to ace your DM prep for Macchiato Monsters

I’m an ageing, lazy referee (this is what we adventure game crowd call the games or dungeon master). Prepping for a game is a lot of fun when you’re coming up with cool ideas, but (at least for me) it quickly becomes boring when I have to write down lots of stats and/or read a bunch of material.

Well, that’s partly why I designed Macchiato Monsters. Below are a few pointers.

1. Start with a challenge

In old-school-slash-adventure games, we like our player characters to be squishy. Danger is dangerous and monsters are monstrosities that eat you as soon as you draw your sword.
MM respects that, but it also grants heroes a little more oomph. Smart players find ways to use their abilities and spells to great effect, and lucky ones can get out of bad situations with a single roll.
So as soon as the PCs are around level 2 or 3, you can drop them in the deep end at the beginning of the session.
Nothing like an in medias res opening scene to get your adventure going.

For Saturday’s session, I was drawing from both Emmy Allen‘s procedural, books-filled dungeon, The Stygian Library, and an old Planescape module called Something Wild.
The former made it easy to generate a small playroom dungeon for the players to interact with. It had some monsters to run away from, a couple traps to fall in, a local character to talk to, and enough ideas to fill in the blanks if needed. I’m sure I could have trusted the procedures in the book to get me there, but half the players that night were new people (most of them new to roleplaying games) and I wanted to spare them the inevitable loading screen experience while I was rolling dice to generate rooms and stuff.
The second part of the session was more open, so I went back to the sandbox.
I had a map (there’s a few good players’ maps in Something Wild), a wilderness risk die table (the simple, lazy DM method MM uses to merge encounters, resources, and discoveries in twelve entries), and some random notes. It took maybe half an hour over breakfast that morning.

3. Don’t read too much material

Roleplaying games adventures are great reads, aren’t they? They have these fantastic places, these characters and situations you want to use in the game. All these beautiful, intricate details you want to get right. I don’t know about you, but whenever I don’t remember one of these details in the middle of a session, I tend to go back to the book to look for it.
While if I’m working off half a page of notes, I just make some shit up.
Since I hadn’t ran this particular campaign for maybe five months, I didn’t remember much from Something Wild. It’s an interesting adventure (at least the part I was using) and when I first prepped it I remember taking pains understanding the goals and motivations of each faction. Well this time around, I didn’t let myself go back for these details. I ran with what I remembered, trusting myself to come up with the specifics at the spot.
And you know what? I don’t think anyone noticed.

Risk dice are very handy tools to add chance and tension to a game. I wrote a table to adjudicate the risk of the party being spied on or ambushed by dark elves (no, I won’t get into the whole story). It took me the whole of three minutes (five with the tweet).

I also added a Transformation die to make the chances of turning into an animal (a planar effect from Something Wild) more interesting:

Each character starts with a risk die (the type depends on their Wisdom, see the Stamina optional rules at the bottom of page 28). They roll every time someone uses magic, and each morning when they wake up.

6. Have some pregens handy

It takes only a few minutes to make a character, but it’s a bummer to have to come up with a new concept if your hero just died. That’s why I try to always have a handful of filled character sheets — plus you never know, I might have an unexpected guest!

7. You’ll prep too much anyway

Of course, I ran for about seven hours and used about 35% of my notes. The dark elves didn’t show up, half the monsters and rooms in the Library ended up being superfluous, and the players didn’t even venture into the sandbox.
I guess that’s one of the secrets: DM prep is its own reward. We come up with all these ideas for the fun of it. Seeing the players tangle with them is just a bonus. 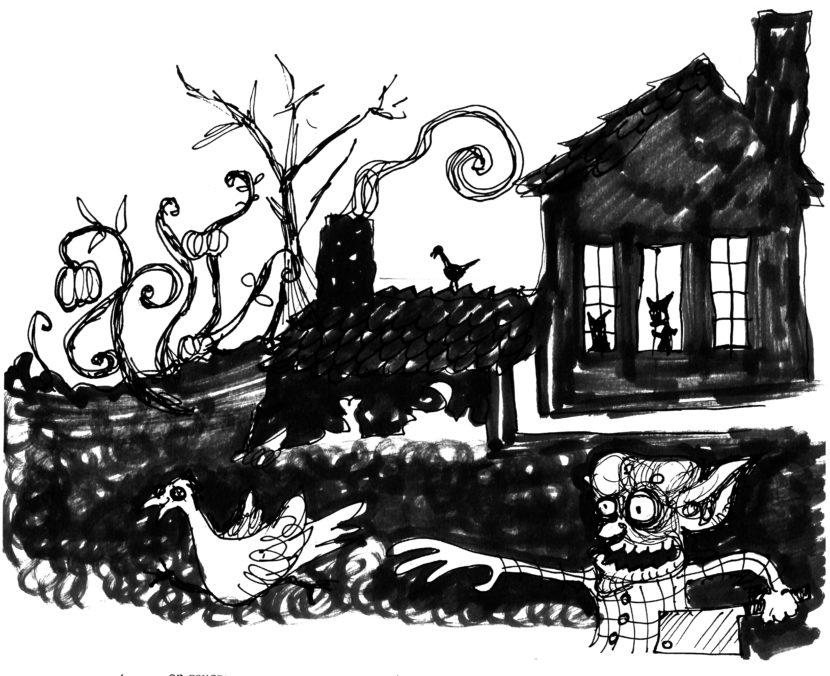 Here is a roomscape for you:

This used to be a wide, well appointed kitchen before it got looted. A smell of burning stew drifts from the fireplace (and into the adjoining rooms).
Referee info: the kitchen was recently visited by goblins who took most of the food and booby trapped the cauldron in the fireplace.

But what is a Roomscape?

Roomscapes are dungeon room descriptions. They’re the creation of Foot of the Mountain, a mapmaker and blogger I’ve met on Twitter. He posts maps and asks people to describe a room of their choice. In a couple of hours, we all get at crowdsourced dungeon for our games. Here is the archive of all the roomscape threads so far. You can play too if you follow Foot of the Mountain Adventures on Twitter! He also has a Patreon where you can support his work.

My roomscape is actually a translation of room number 5 in my French-language adventure La nuit des rêves perdus (Night of Lost Dreams), which I published on my itch.io page a week or two ago, using one of Foot of the Mountain’s maps. It’s written for Old-School Essentials (so fully compatible with B/X D&D) and I’m hoping to carve out the time to publish it in English too.

I wrote this adventure for newcomers to the old school adventure game style, and I’ve tried to organise the information in order to help the referee easily find the information they’re looking for. After a sentence of general description, the referee gets background information (in italics). The rest is in bullet points: immediately apparent details are in all caps, and lootables are in bold.

You tell me if it would work for you. (And then I can make the adventure better when I translate it.)