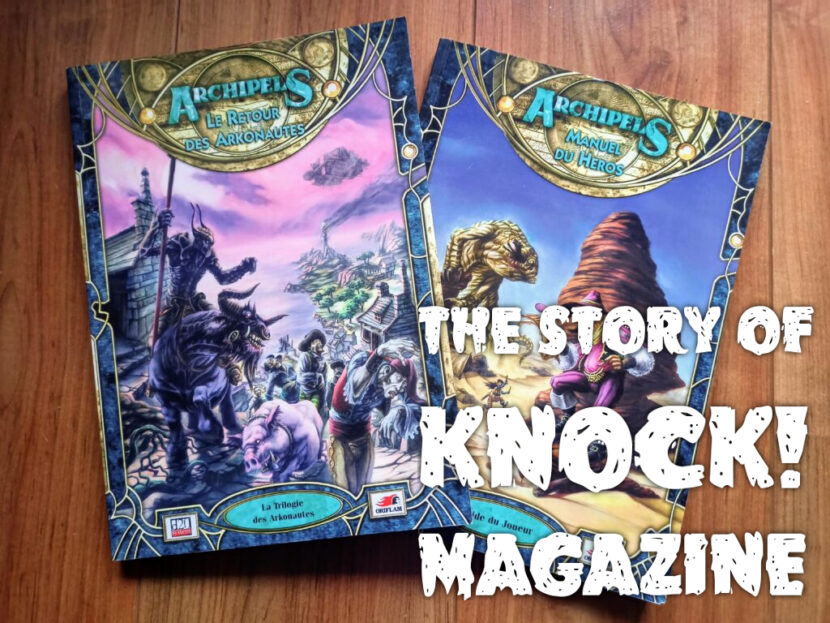 This month, I’m helping run my first Kickstarter campaign ever.

We are crowdfunding the first issue of KNOCK! magazine, a publication we have exhaustively dubbed an Adventure Gaming Bric-a-Brac and a Compendium of Miscellanea for Old School RPGs. It’s a bazaar of the OSR if you like. Not a news periodical (who needs printed news for a niche hobby these days?) but a thick, colourful brick stock full of ideas you will want to keep close by for perusing, daydreaming, and prepping your next session.

Where did the idea come from? Well, it came from Urt, a village in the Basque mountains. That’s where the email I got came from, about two years ago.

I had met Olivier circa 2001 in Paris, in the offices of Hexagonal, when he was laying out their gaming magazine, d20. Soon after that, he came to write for the third party D&D line I was in charge of, Archipels. I really enjoyed his writing, which was very much in keeping with the heroic-meets-Vancian tone we’d established for the past couple years. It was obvious we’d had the same influences in our gaming youth.

But back to winter 2018: Olivier had drifted off roleplaying games shortly after Archipels, and had only come back to them through the OSR blogosphere, a dozen years and a move from a barge on the Seine to a horse farm in the Pyrenees later. Having created a sustainable model with his English language wargaming magazine Battles, he had had an idea for another publication. I’ll quickly translate his initial pitch, because it feels like we stayed pretty close to it:

My OSR project is nothing revolutionary; to publish a revue, not a magazine [I don’t think there’s a straight translation of revue in English]. So no news or reviews, but a compendium of theory articles, thoughts about game systems, scenarios, play aids, random tables, bits of settings, etc.

Sure, all of this is already on the internet but I want to make something you can read old school, like sitting by the fire. It’ll be printed on nice paper, and it’ll take you several weeks to read, taking your time, bit by bit.

So we went to work. Olivier drowned me in links of blog posts he wanted to publish, and I started getting in touch with their authors, sending them mockups and contract terms. Also, I got an advance on my royalties immediately. Which this freelance designer immensely appreciated — it paid for Christmas that year.

And then, life happened. We got back in touch after a few months of silence, made some progress, and dropped the ball again when something more urgent came along. Our growing stable of authors and artists didn’t seem to mind the time the whole thing took.

Every time we had a frenetic couple of weeks, I got a longer, crazier looking PDF to feed my motivation. And we got there, taking our time, bit by bit.

Now, with the help of our siblings in arms of the adventure gaming scene, KNOCK! Magazine issue one is becoming a reality!

(Dropping the website for our imprint here too: themerrymushmen.com – this blog post will be posted there in the next couple of days.)