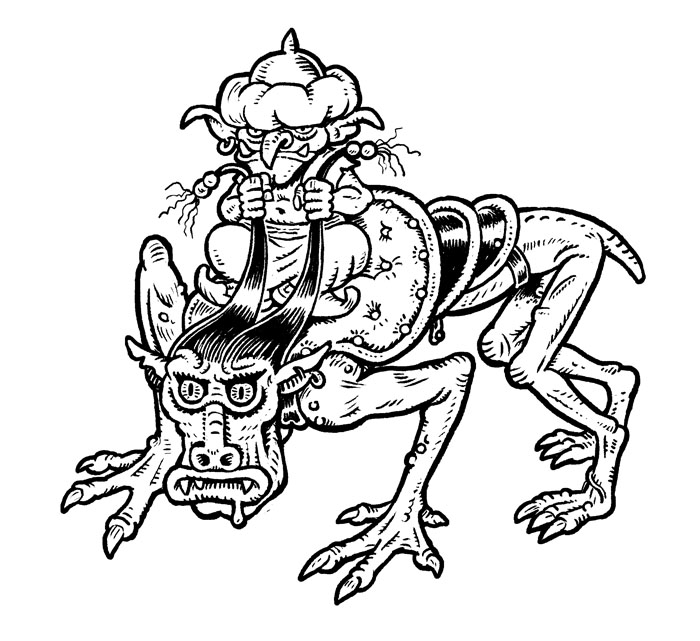 When the situation started, I thought it was a great creative opportunity.

And it is: extra time to write and think about games, who wouldn’t love that? Answer: my brain. I’ve found it very difficult to use my brain to make stuff. I mean I read, I write, I’m interested in new things, it’s all fine really. But making is like pulling teeth from my skull.

My itch.io feed has been full of new releases. Games made during, and sometimes inspired by, this pandemic. I’m very happy to see that my fellow game designers are able to produce. (The bastards.) We need games of the imagination now more than ever.

I have made Goblinburg my single creative project for this crazy period. But since I cannot make things easy for myself, Goblinburg is a multi-faceted project. We talked about Goblinburg with my co-conspirator Didier in this video if you want more details right now (and to see a lot more cool gobliny art), and I’ve also dropped some hints on Twitter.

You can also dig into the archives of this blog, as it has imported posts from an aborted Goblinburg project, like this one about the map. But you don’t have to, cause I’ll just try and sum it all up now:

Goblinburg is a D&D Zine

Goblinburg is a system agnostic setting for Dungeons & Dragons (and other fantasy games, really). It is designed and written to play as an adventure game, meaning as a sandbox, where players do whatever they like and the games master/DM/referee has all the tools to follow them — without scripting anything ahead.

Goblinburg will exist in zine form – or PDF – that you will be able to buy at some stage in 2020.

Goblinburg is an Online, Lunchtime Game

I never work as well as when under pressure. And Satan knows I need pressure to get anything done right now. I’ve been meaning to blog about this for weeks.

Goblinburg is also the setting of a public, open-table game I want to run at lunch time. I am doing this to promote Desks & Dragons, but also to show that short (one-hour) game sessions are beneficial to the mental health of everyone involved.

I’ve ran a few games with my usual pool of players out of the Fumbally Exchange here in Dublin, and I’m beginning to open it to new people, gamers and newbies alike. If you’d like to come explore Goblinburg with us, I’ll let you know how to get in touch soon.

Did I say there would be goblins?

Goblinburg is full of goblins – goblins of all sorts, from this Earth and other fantasy worlds. If you’re not a goblin, chances are the burghers will categorise you as another type of goblin.

My old friend Didier Balicevic (I’m linking to Goodreads cause he’s kind of internet-shy) has sent me tons, and I mean tons of goblins. Some based off my writing, some inspired by it, some straight from his weirdo Dungeon Master brain.

I managed to sort of organise my workload, so productivity should resume soon. I want to optimise the writing for short, engaging sessions where old dungeoncrawlers and neophytes can easily mix.

My priority right now is to design the tools the referee’s will need for these sessions. We’ll test these tools together, and then I’ll go back to writing a zine that you can use yourself. 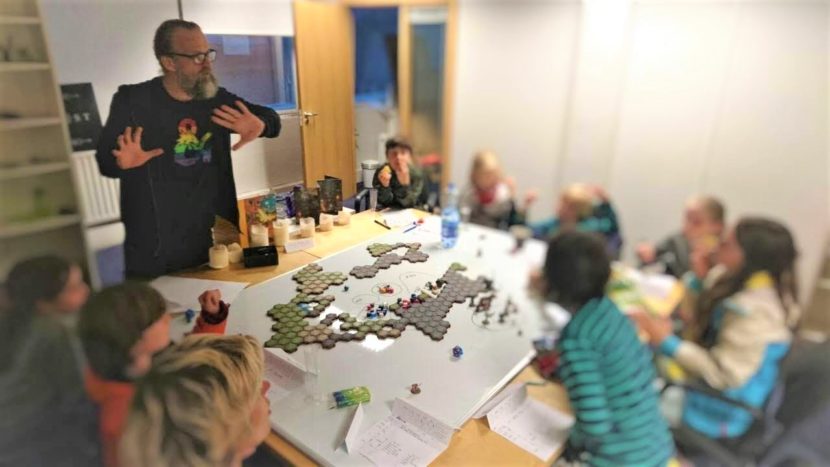 While I don’t run team building D&D games for children, I’ve had the opportunity to run a few kids games in the last few months. I thought I’d share my experience as a game designer.

When I say easy games, I don’t mean they should be easy to win — I mean they should be easy to learn. Whatever your tastes in RPGs, you shouldn’t waste your time and the kids’ enthusiasm on learning the intricacies of a rules system. Out with Pathfinder and D&D 5E, in with Pits & Perils and The Black Hack (and so, so many others). Of course, nothing prevents you from hacking into your favourite system to make it more accessible. That’s what I do with Lunchtime Dungeons, but it may be more work than what you’re prepared to do.

Games with engaging and ‘gamey’ mechanics are certainly a plus when playing with gamers, but in practice these mechanics can be difficult to implement. Recently, I tried using a variant of my krâsses mechanic from Lanfeust / the dK System, and I found no one had any interest in using it. Turns out straightforward dice rolls brought all the tension we needed.

If, like me, you are an ‘adventure gaming’ enthusiast (aka an old school D&D fan), you may want to make your ruleset of choice a tad more forgiving and heroic. The pathetic aesthetic we like so much may not work so well with 10 year-old kids. Give them cool powers, magical items, pets… All the stuff they’re used to expecting from a video game.

I’m not saying you can’t teach old school games to preteens. You certainly can if you have the time. I tend to run one-shots, so I’d rather give my players some instant gratification. And again, I am not trying to help people build better communication skills using Dungeons & Dragons. I’m just here to give a bunch of kids a good time and — hopefully — give them a taste for tabletop games.

Like most newcomers, kids can get confused when dropped into a theatre of the mind environment. Having visual and tactile props is a good way to alleviate this and maintain focus. Have some miniatures or tokens, a battle mat, terrain pieces, spell cards, health counters, etc. Illustrations for places and people will also help with everyone’s immersion.

I don’t do acting props, but it strikes me that a hat, pipe, glasses, or other simple accessory would be great to establish important NPCs. Even with a table full of adults, it can be hard to keep everyone’s attention. I’m thinking this would spare you the “sorry who’s talking now?” question.

That said, NPC interaction probably isn’t going to be the focus of your game. I’ve never seen kids get involved in a long conversation with a character, so I tend to keep it to a minimum. I wait for them to set the tone of the interaction, make sure they get the info they need, and we keep going.

Play with a chill zone

If you plan to play a couple of hours, you can bet that some kids will get bored or distracted once in a while. This is especially true if you have a large group of players. Having something else for them to do can be a good way to keep the table engaged.

Now make sure your chill zone isn’t more instantly gratifying than your game. I’d avoid the TV or console for example. If you have access to a garden, a football or trampoline can be a good way to blow off steam while they wait for their turn.

Not all kids are well behaved, and happy to wait until they’re asked to. Especially if it’s a birthday party and they’ve been hitting the sugary treats. Under these circumstances, letting the table police itself when asked what to do can become a nightmare. Not only will you be leaving the game with a headache, but you may have had to shout to make yourself heard (bad), or left out the more shy players (worse).

As with everything else in tabletop roleplaying games, jumping in is the best way to learn. So why don’t you run a game for the little people in your life? If you have already done so, I’m sure everyone would love to know your top tips. 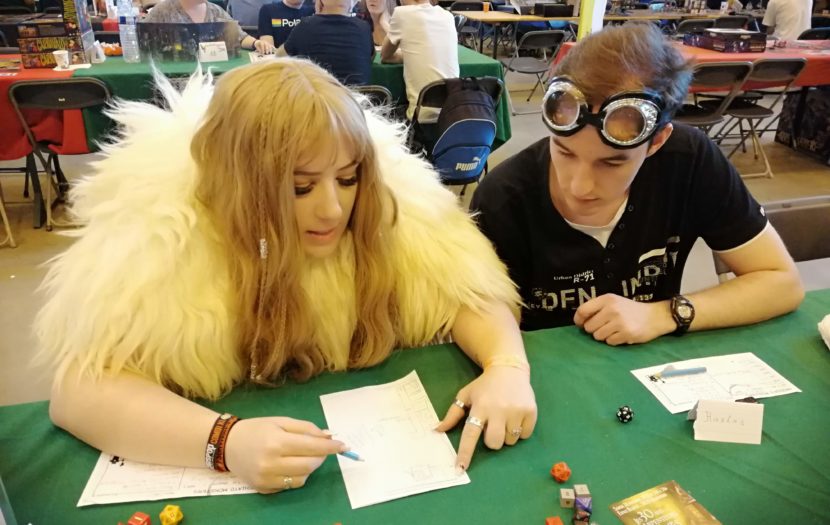 Running Dungeons & Dragons in a corporate environment isn’t something we nerds usually do.

Roleplaying games are traditionally something we play with our friends, and doing it with strangers for team building and wellness purposes is a bit of a leap. Fortunately for my self confidence, it turns out I’ve done this many times before. I spent the Easter weekend at a convention – the always amazing Trolls & Légendes in Belgium were I was invited to run my latest release, Macchiato Monsters. I’ve done this sort of thing maybe a hundred times in the last 20 years and I always love it, but this was the first time I ran at a con since I started Desks and Dragons. And interestingly, I noticed more than a few similarities between the ‘demo’ games you typically run at such nerdy gatherings and the ones I host in offices.

Only rarely will you know anyone among the players. So make sure everyone knows what this is all about — from RPG principles to fantasy tropes to social contract to old school gameplay – before you even start explaining the rules of the game. You need to ask questions and adapt you brief to your audience. Be wary of neglecting the shy player who doesn’t know as much as the others. During the game, you’ll have to pay attention to everyone and make sure no one gets bored. This is probably the main responsibilities of a game master.

Furthermore, the players don’t know each other either – some of them will have come together, but it will almost never be a table-full of friends. These teams within the teams may create interesting dynamics during the game, but they may also become a problem. Your job as the GM is to create a group purpose, at least until the magic of imaginary team building happens. Very soon, the players will realise that they need to rely on each other if they want their characters to survive and their party to achieve its goals. This is where team building happens!

Let’s be honest: tabletop roleplaying games are always too short. Handling time is another skill of a good GM. You try to keep things fun, balancing player choice and narrative pace. In a convention, you have three or four hours for people to experience as much of your game as feasible. A demo session cannot afford to be slow or unfocused; there won’t be a next time to find out who killed the Duchess or to escape the wizard’s tower. The session must have a satisfying ending, an interesting middle, and a compelling start.

This is doubly true in office games. Even if most of my clients opt for a four-part game (the recurrence is key to team engagement), it isn’t a lot of time for a full adventure. Like other veteran conventions GMs, I use all the tools and tips I know to make every lunchtime session engaging and fun – the rules and the adventure framework I have designed help me a lot, but I keep learning from other referees and coming up with new techniques.

Playing with the format

Short games, new audiences, these are both opportunities to get creative. Have guests, have props, or simply play around with the story structure. Keeping a stack of index cards with tricks like in medias res starts or flashbacks is a good thing. Or you can let players come up with small parts of the game world, pertaining to their character or not. The list is endless, but I’ll have to try and post about it sometime.

To give you an example, at Trolls & Légendes I ran the same dungeon delve on both the Saturday and the Sunday. As the first group made it out with some treasure and a decent bit explored, I asked them if they would sell the map they drew to the innkeeper at the village nearby before leaving the region. The next day, I gave the next group of players the opportunity to buy this map. Here’s some of them, puzzling on some hand written notes.

This made the dungeon come alive for the second group of players and gave them a sense of persistence.  Little ideas like this will make a game memorable — make sure you always have some in your pocket!